Skip to content
Tap Here to Call Us Now!

OVERALL ECONOMIC OUTLOOK
The majority of company leaders, HR executives / managers, and hiring managers (62.7%) expect the economic conditions facing their company in 2017 to improve. Interestingly, the percentage of respondents who expect ‘significantly better’ economic conditions (9%) in the coming year is the lowest number since collecting data began in 2012; however, the percentage of respondents who expect the economy to ‘improve significantly’ or ‘improve moderately’ was essentially
flat between 2014 (63.4%) and 2017 (62.7%). 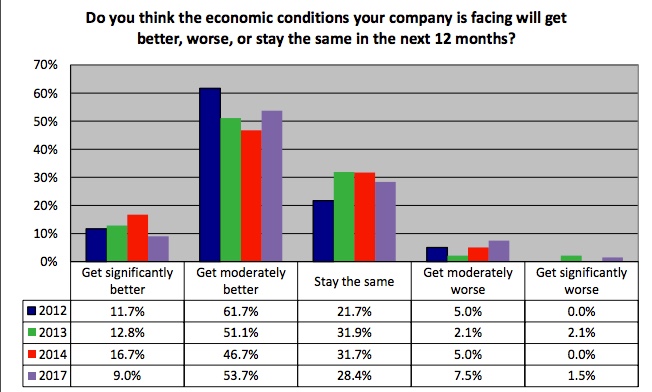 OVERALL HIRING EXPECTATIONS
Overall, the majority of respondents expect hiring at their companies to increase moderately (46.3%) or stay about the same (34.3%) in 2017. In fact, the combined percentage of respondents who expect either a significant’ or moderate increase in hiring was virtually identical vs. 2014 (53.8% vs. 53.3%, respectively). 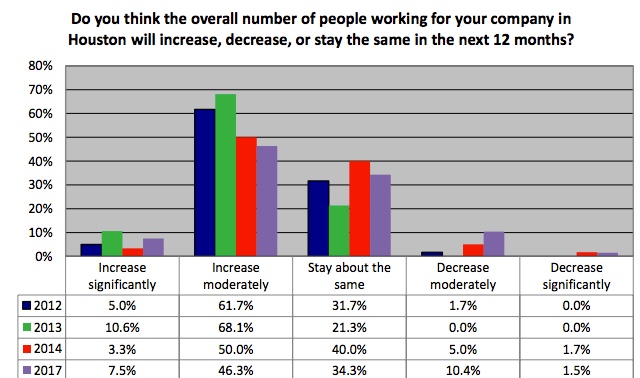 MOST ANTICIPATED STAFFING CHALLENGES
As has been the case in each of the three previous years, attracting qualified talent continues to be the most frequently cited human resource challenge for Houston companies. However, the percent of companies who site attracting qualified candidates as their largest staffing concern has slipped to 44.8%, the lowest level in the survey’s history. Retaining current employees is once again the second highest staffing priority for companies entering the new year – cited by an all-time high of 31.3% of respondents. 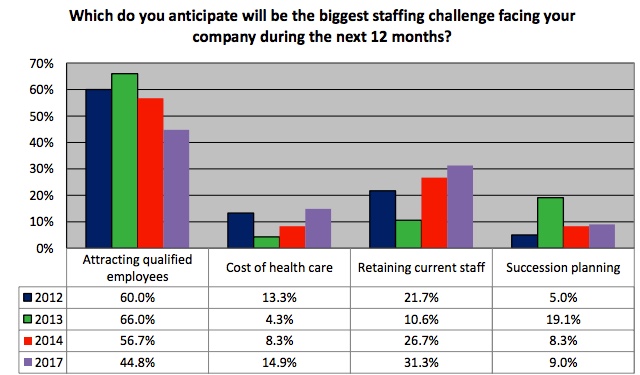 FUNCTION-SPECIFIC HIRING EXPECTATIONS
The majority of Houston companies are entering the new year expecting to maintain similar hiring rates for most job functions. However, there does appear to be pent up demand for manufacturing and operations roles, as the Houston economy pulls out of its downturn. 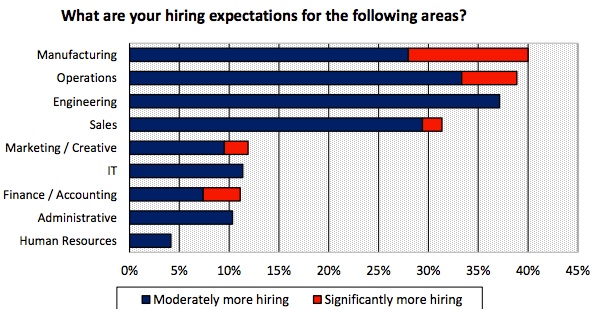 POSITION-SPECIFIC HIRING EXPECTATIONS
Approximately half the Houston employers surveyed are expecting to increase hiring of full-time workers in 2017. Approximately one in three respondents is anticipating a moderate increase in hiring for temporary positions, while only 23% of respondents expect to increase temp-to-perm hiring.

Call us today at

The Houston Hiring Picture is Improving